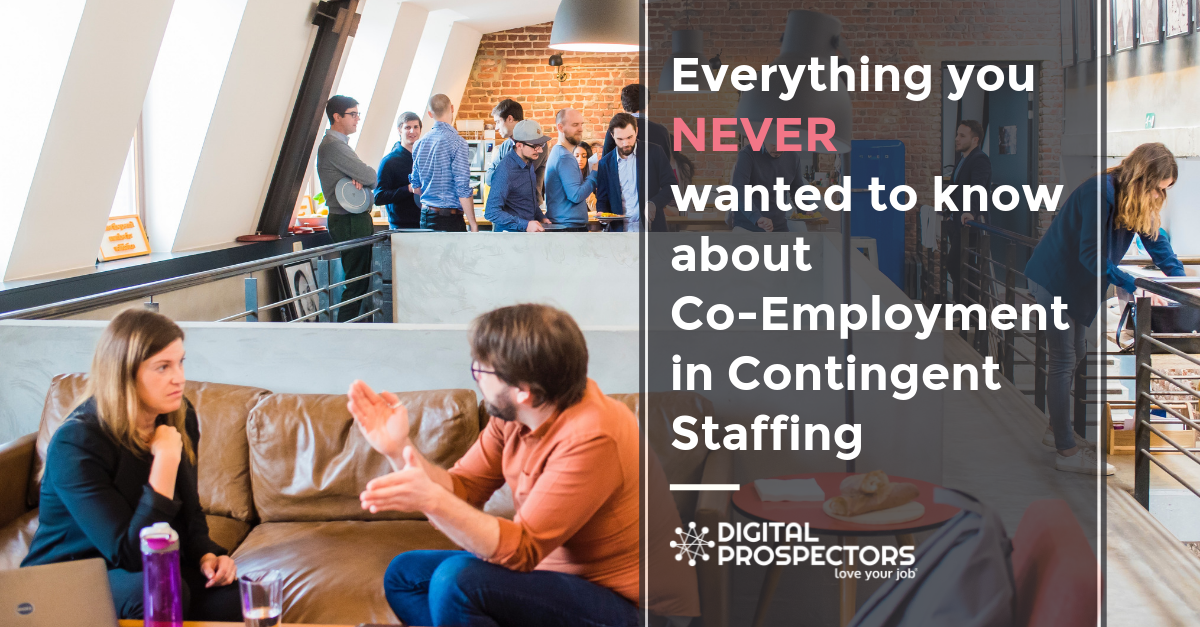 Co-employment in contingent staffing gets a bad rap and is frequently seen as something to avoid at all costs.  Many buyers of contract labor implement policies on tenure limits, mandate employment gaps or use different color badges for contractors and restrict them from company parties and meetings – all to avoid co-employment.

In reality, forcing great contractors to quit or take a mandated work gap causes a lot of disruption and blocking them from company parties and meetings only alienates them and makes them want to quit.

Ironically, what these measures don’t do – is reduce the risk of co-employment.

Luckily, co-employment is not actually the bad guy it has been made out to be – in this blog I’ll attempt to provide a better understanding of what co-employment is, why it exists and how to live with it in contingent staffing.

Disclaimer: this blog is only geared towards W2 contractor programs.  Independent Contractor (IC/1099) Worker Misclassification is a whole other topic and not covered here.  Much of the content found here is based on Staffing Industry Analysts’ Certified Contingent Workforce Professional (CCWP) program and I encourage anyone wanting to know more to sign up for themselves.  Lastly, I’m not a lawyer (I don’t even play one on TV) – I’ve just done a lot of research on this topic and want to share what I’ve learned.  This is serious business with real consequences so anyone designing a plan should work with a qualified professional that understands your specific industry and geographic location.

Definition: Co-employment is when two employers exercise significant and simultaneous control over the same employee.  In contingent staffing this happens when the agency has control over personnel matters (payment, benefits etc.) while at the same time the client exercises supervisory and workplace control (instructing contractors on when, where and how to do the work).

In virtually every contingent workforce situation, there is some form of co-employment (aka: joint employment) relationship present – it is a fact of life.  Knowing this basic truth is the basis for not trying to ‘avoid’ co-employment – but rather to understand it so that we can simply comply with it.

In reality, the responsibilities in co-employment are the same ones as in traditional employment – just split between two parties: the staffing agency and the end client.

The IRS (Internal Revenue Service), DOL (Department of Labor) and EEOC (Equal Employment Opportunity Commission) have created many provisions to ensure that taxes are paid and workers are treated fairly.  Knowing ‘which employer’ is responsible for each law is the key to removing risks typically associated with co-employment.

Here is an overview: The DOL tests show FLSA to most likely be a co-employment situation because one employer (the agency) is working directly or indirectly in the interest of the other employer (the client) in relationship to the employee (the consultant employee).

However, because the agency pays the contract employee – FLSA responsibility is generally understood to fall on the agency.  Importantly, it is up to the agency to work with the end client to ensure that the contractor is being paid legally (proper wage, exempt / non-exempt etc.).

In an audit situation – it is not defensible for any non-compliant agency to claim ‘We’re just paying the contractor according to the client’s wishes’.

“Using temporary staffing agencies does not absolve employers from their responsibilities under the law,” said DOL’s Wage and Hour District Director James Cain in Philadelphia.

In other words – end clients can also be held accountable (Citigroup settlement) for any wage related injustices in an audit situation.

An example of a common (but avoidable) co-employment blunder in contingent labor is when the client terminates an agency contractor w/o communicating with the agency first.  In states like Massachusetts it is required that the terminated employee be paid all wages owed with a physical check upon termination.  When the client and the agency don’t communicate and work in concert they can inadvertently prohibit each other from meeting their obligations to the worker.

Family and Medical Leave Act (FMLA) deals with providing employees up to 12 weeks of unpaid family / medical leave while maintaining the employees’ health insurance – and generally to restore the employee to the same or equal job when returning from their leave.

The DOL applies the same FLSA tests when evaluating co-employment for FMLA, so this is also most likely a co-employment situation.  It is important for the agency to realize this fact, take ownership and educate the client that both parties own FMLA responsibilities for their co-employee consultants.

In an audit situation both client and agency can be at risk if the candidate were to file a claim for a violation of this employee protection.

Determining co-employment here can be complicated because over 15 different tests are used to make a decision based on the ‘totality’ of their findings.  A lengthy document put out by the EEOC (the commission that regulates these statutes) called “Application of EEO Laws to Contingent Workers Placed by Temporary Employment Agencies and Other Staffing firms” is available for more reference on this topic.

Notably, and much less complicated, is the fact that in most staffing situations the EEOC rules that both the agency and the client have duties and responsibilities here as co-employers.  Avoiding co-employment risk under EEO is about knowing who needs to do what.

For non-discrimination and anti-harassment, the courts have shown that it is the responsibility of both the agency and the client to step in and make corrective actions.  It follows that contractors should complete both client and agency anti-harassment training and that neither co-employer can use the other as a shield to avoid discrimination liability.  Importantly, co-employers are not normally liable so long as they take reasonable steps to prevent harassment and discrimination from happening and promptly investigate and correct either if they are alleged.

A common mistake with contingent employees can happen in relation to the Equal Pay Act.  If a project requires multiple contractors of the same title and skill set – then the bill rate and pay rate for those contractors should be the same as well.  This often get’s overlooked in contract staffing – and thus presents a risk to both the agency and the client when the consultants inevitably find out what other teammates are paid and complain to the EEOC.

When the agency and the client understand that EPA is a co-employment responsibility they can make sure to include different job titles, duties and grades into the job description when multiple pay grades are required for the same ‘skill set’.

To avoid non-compliance issues and to be stand-up employers in general – agencies and clients need to look at EEO as a shared responsibility.  Each party needs to act accordingly (hiring the consultant as if he/she were their own internal employee), communicate with one another and coordinate their actions to ensure compliance

Because contractors work on site at the client and the client generally supervises the contractors and the workplace – the DOL tends to look at the client for any OSHA violations.  However, it is also the agency’s job to ensure a safe workspace for its consultant employees and to advise the client of situations where its consultants’ safety may be in jeopardy.  Failure to do so could result in agency liability in the event of a contract worker claim.

Employment Taxes – deals with making sure that the government is getting its accurate portion of both employee and employer payroll taxes for FICA (Federal Insurance Contribution Act – which funds Social Security and Medicare), FUTA (Federal Unemployment Tax) and SUTA (State Unemployment Tax).

Because the agency pays the worker – the IRS looks to the agency for compliance and remittance of tax dollars.  However, if the agency defaults, the IRS will move up the food chain and go after the client.  This is an important reminder to clients to choose staffing partners that are both ethical and solvent to ensure this critical responsibility is happening.

Because the agency is paying the employee and their payroll taxes – they are also liable for WC insurance.

Clients would face a huge exposure to ‘unknown’ jury awarded damages for workplace injuries on any contractor not covered by the agency’s WC policy vs. the ‘exclusive remedy’ provided by WC insurance.  It is therefore critical that clients work only with solvent and reputable agencies who are making their WC payments and in good standing with their coverage providers (because some don’t). Immigration Reform and Control Act (IRCA) requires employers to verify and document employees’ legal right to work in the US (I9s and Work Visas).

This also generally lands on the agency to provide compliance since they are paying and administering benefits.  However, if the client has ‘adequate’ information that their supplier may be doing something wrong – they can also be liable if ICE (Immigration and Customs Enforcement) comes knocking.

It is really important that agencies process I9s properly and clients should exercise extreme caution when working with visa candidates to ensure their agencies are not certifying contractor durations or work progress (for OPT visas) without their knowledge and permission.

Violations here can have significant consequences for both co-employers as seen in this recent example at Wright State University.

Employee Retirement Income Security Act (ERISA) deals with minimum standards for and equal treatment of all employees regarding voluntary retirement and health plans.

When it comes to regulation of tax qualified retirement plans and most welfare / fringe benefit plans, the concept of co-employment is generally not recognized (otherwise employees could ‘double dip’).  In general, this responsibility lands on the staffing agency as the ‘payer’ of the contract employee.

For clients, most benefit plans can exclude ‘leased employees’ (employees through staffing companies) by crafting language in their plans to exclude that class of employee.  In the famous ‘Microsoft Case’, it was the employee stock purchase plan (ESPP) that caused them so much pain (aka: huge settlement).  It is harder to exclude ‘common law’ employees (which happens after 1000 hours) from an ESPP – but with careful plan design, common law leased employees can still be excluded from ESPPs. There is now ‘Microsoft Inoculation language’ that can even exclude employees who get ‘reclassified’ as co-employees of the client.

The best way for clients to protect themselves here is by adding the right language to their own plans and ensuring their leased employees are happy and getting great benefits from their agency suppliers.

Don’t try to avoid co-employment, that is impossible in contract staffing.  Agencies need to take it upon themselves to drive communication, education and ultimately compliance.  This will ensure the valuable work that contractors perform does not have to be interrupted with term limits or mandatory employment gaps.  It also helps bring these valuable resources into the culture of the company by avoiding different color badges or banning contractors from company parties.

Virtually all co-employment issues (risks) arise due to a lack of understanding and communication between the staffing agency and the end client.  This can cause either co-employer to unknowingly default on their responsibilities – opening the door for a worker complaint.  We can all get along in a co-employment world as long as we communicate effectively and act responsibly on behalf of our employees.

An experienced recruiting agency can be a valuable resource for companies trying to mitigate the risks of co-employment. Instead of attempting to avoid co-employment, partnering with a staffing agency that communicates effectively and has a great understanding on the matter can greatly reduce co-employment risks. Contact one of our IT staffing specialists today!